Zillena
Connect
This site uses cookies. By continuing to browse this site, you are agreeing to our use of cookies. More details
19 September
News

Well all said it's been a pretty good expansion so far (knock on wood).
Glad to see everybody enjoying the content, and to see old faces coming back to the game.

So back to raid loot. Again since we know the major "points" from previous expansions and going to keep it as basic as possible.

Progression raid nights are Tuesday, Thursday at 5:30 pm server to 8:30 pm server. Invites start at 5:00 pm server. Remember there are no break times.

DKP and Attendance
Attendance and therefore DKP will be tracked and monitored on progression raid nights (Tues/Thurs).
It's early in the expansion and we may think about a third night, but mostly likely if we do one it would be temporary. DKP may not be awarded on alternative nights.


MAINSET (Values are based upon opening bids for standard Heroic loot)

*Titanforged loot more than 15 ilvls over standard heroic loot will be starting bid will be decided at the time of the drop.

* Values for offset loot is 50% less than "MAINSET" loot. Offset loot for "pure" DPS classes will only be applicable to weapons for now. There will be no Off set bids on side grades - these will be viewed as Main set bids.

**Normal loot will be charged for initially in the raid set and will be 50% of the values set for heroic loot.

Hello!!! The site will be updated shortly with more raid information. Right now first raids are 9/20, normal or heroic depending on what we can get through (see calendar). Item level to aim for is 830+ and 3 artifact slots. Please come enchanted, gemmed, with consumables as initially we will not be supplying these things. Be prepared this is three solid hours no breaks.

If you are interested in raiding with us, guilded and not normally raided with us (not have a normal raid spot) please write an in game mail to Sabellice on Shadowsong and let me know class/spec you would like to play. This applies to anyone who has taken a break from raiding in the last two months too unless we have spoken.


If you are unguilded you are invited to apply and we will get back to you within the week.

p.s. For previous members returning there will be a dkp erosion. 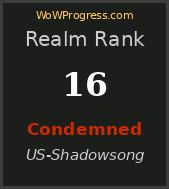